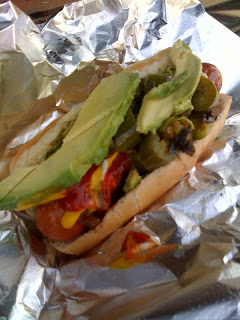 Recently voted as LA’s OFFICIAL HOTDOG: the infamous BACON WRAPPED HOT DOG. Now, many of you I know find these things to be repulsive and gross, but let me just tell you- that’s your problem. You are missing out on something truly great, so your loss. And for those of you who don’t eat pork, I’m sorry.
ANYWAY, these little street meat creations have famously made its name in the “Hollywood club scene” for years now. They have been cooked by Mexicans outside all the hot night clubs on little stands, and when you are coming out of the club, you can tell one is close because of its smell. You usually see drunk girls in tight dresses and heels that look like hot messes scarfing down one of these screaming how good it tastes, or a bunch of guys surrounding the little stand ordering multiple hotdogs lol. THIS IS SOME SERIOUS GRUB FOOD.

But the ones in Hollywood don’t even compare to what I’m going to blog about right now. Downtown Los Angeles, where I must admit is a great place to do some serious shopping, is where the BEST bacon wrapped hotdogs are found, and in particular…ANGEL’S HOTDOGS.

I went downtown to the shopping district recently with my mom to my favorite high-end dress store. After scoring two amazingly beautiful dresses, (which I pictured below so you can see one of my purchases), we decided to walk around near Santee Alley and shop around a little bit. I don’t go downtown very often, but when I do, I know that there will be plenty of bacon wrapped hot dogs, good authentic Mexican taco and quesadilla stands, churros, fresh fruit with chili and lime, and so much more bomb street food. It’s a foodie’s paradise let me just tell you…
Anyway, we came across the Angel Hotdog stand, and decided to have a hot dog. I’ve had many bacon-wrapped hotdogs in Downtown LA, but this stand was the BEST I ever ever come across and this is why. This guy’s stand wasn’t illegal. It was approved by the city, which made all of his food not sketchy like some of the other ones, and I actually could trust the meat, lol. He had FRESH everything: avocado, grilled onions, salsa, and jalepenos he offered to grill fresh for you. He made it exactly how I wanted it, and cut open a fresh avocado for me, and sliced and grilled the jalepeno pepper as well. His hotdog’s are $3, piled with as many toppings as you want, or you can get the special combo with chips and a drink for a whopping $3.99. You can’t get much better than that! BOMB FOOD FOR DIRT CHEAP, nothing is better!

So if you are ever in Downtown LA, and come across a hotdog cart called “Angel’s Hotdogs”, I highly recommend you stop and try one of these amazing creations. The owner also caters parties and private events for $3 a hotdog just in case you ever want to throw a party that offers bacon wrapped hot dogs, lol.
By the way…this is one of the dresses I bought when I went to my favorite dress store. Like? I’d say it was a successful trip to Downtown LA! Hotdogs and beautiful dresses…KEEPIN’ IT CLASSY. You know how I do 🙂