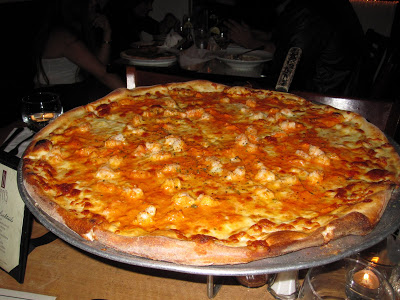 I’ve managed to land my drunk ass at Berri’s Cafe two times in one week. Both at 3am. That’s how you know I had a good week, lol. Berri’s Pizza Cafe on 3rd street is a club after the club. Not really, but this Italian pizza cafe bumps loud house music and is packed all hours of the night, especially with people that just left the club wanting to get their grub on. Specializing in pizza, I go to Berri’s for one reason…for their famous LOBSTER PIZZA. If you don’t like seafood, that’s a damn shame, and even though Berri’s menu is big and has something for everyone, I am blogging especially for the lobster pizza, so sorry lol- don’t mean to discriminate against you non-seafood lovers.
Even though it wasn’t a smart move, my friends and I ordered champagne with 24K gold flakes lol. It was actually amazing, but probably not the best move at 3:30am.

Next, the pizza. Berri’s Cafe is known for making great pizza. So many different and unique pizza combinations, such as a Seafood Pizza, a Spicy Mediterrean Calamari Pizza, Goat Cheese and Portabello Pizza, and more. Unfortunately I can’t get myself to try any other pizza because I’m stuck on the Lobster Pizza. It’s thin crust made with a pink sauce, lobster and shrimp, and lots of cheese. With some crushed red pepper sprinkled with some parmsean cheese…OMG. Heaven…

We ordered a couple other dishes such as coconut shrimp, penne bolognese, eggplant bruschetta, and two amazing desserts: a warm chocolate mousse cake with rasberry sauce on top, and tiramisu, which was one of the best I’ve had. It was so creamy and was made perfectly. They also have incredible garlic bread and pesto dip. Great to soak up all that alcohol lol. But really, I recommend getting pizza at Berri’s. That’s what they do best.