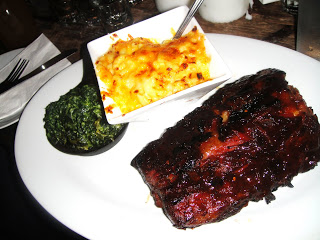 Southern Hospitality, a Memphis BBQ joint in New York City, brings Southern Comfort food to the Big Apple. Creator of the restaurant, Justin Timberlake along with his friends Eytan Sugarman & Trace Ayala opened up this celebrity hotspot in two locations in NYC- one in Hell’s Kitchen and the other on the Upper East Side. Southern Hospitality serves real Southern dishes such as pulled pork sandwiches, baby back ribs, Southern fried catfish, catfish lollipops, chicken and waffles, fried pickles, grits, crawfish & cheddar hush puppes, mac n’ cheese, and so much more.
Located in Hell’s Kitchen, I walked into Southern Hospitality on a Sunday night and it was poppin’. The place was packed. While waiting for the rest of our party to show up, General Manager Bryan Zabinski brought my sister and I to the bar to try Southern Hospitality’s house specialty cocktail. Made with Justin Timberlake’s tequila “901”, this drink was so delicious. Similar to a Mojito but made with tequila, it was also made with crushed/muddled berries. Sweet but still crisp and refreshing. Loved it!

When the rest of our party arrived, we headed downstairs to our table. Upstairs seemed more of the casual part of the restaurant, while downstairs was more “private”, darker and more of a lounge. Sitting at the table next to us was a bunch of NBA players from the NY Knicks with their families. There are definitely lots of celebrities that eat at Southern Hospitality. I really liked the vibe there…cool yet “homey” & casual- you definitely don’t feel like your in a big city!

Now to the food…I literally wanted to order everything on the menu lol. Everything sounded amazing. But, narrowed it down to this:

~Philly Cheesesteak Eggrolls w/ Sriracha-Spiked Ketchup- OMG. These were the best. My favorite thing we ordered. Obsessed, and need to go back just for these! They were melt-in-your-mouth. So amazing.

~Half Rack of Baby Back Ribs with Creamed Spinach and Mac N’ Cheese- MMM. Loved everything. Ribs were great, creamed spinach was made creamy & perfect, and same with Mac N’ Cheese. It was all delicious.

I will definitely be returning to Southern Hospitality. So many more things I want to try on the menu. I was STUFFED. Bad idea to be dressed up in tight clothing lol. This is FOOD COMA type shit. All I wanted to do was go to bed after lol. What a great dinner!
NEED I SAY MORE??? GET ON IT.
SOUTHERN HOSPITALITY BBQ
(HELL’S KITCHEN LOCATION)
645 9th Avenue
New York, NY 10036
(212) 265-1000
www.southernhospitalitybbq.com