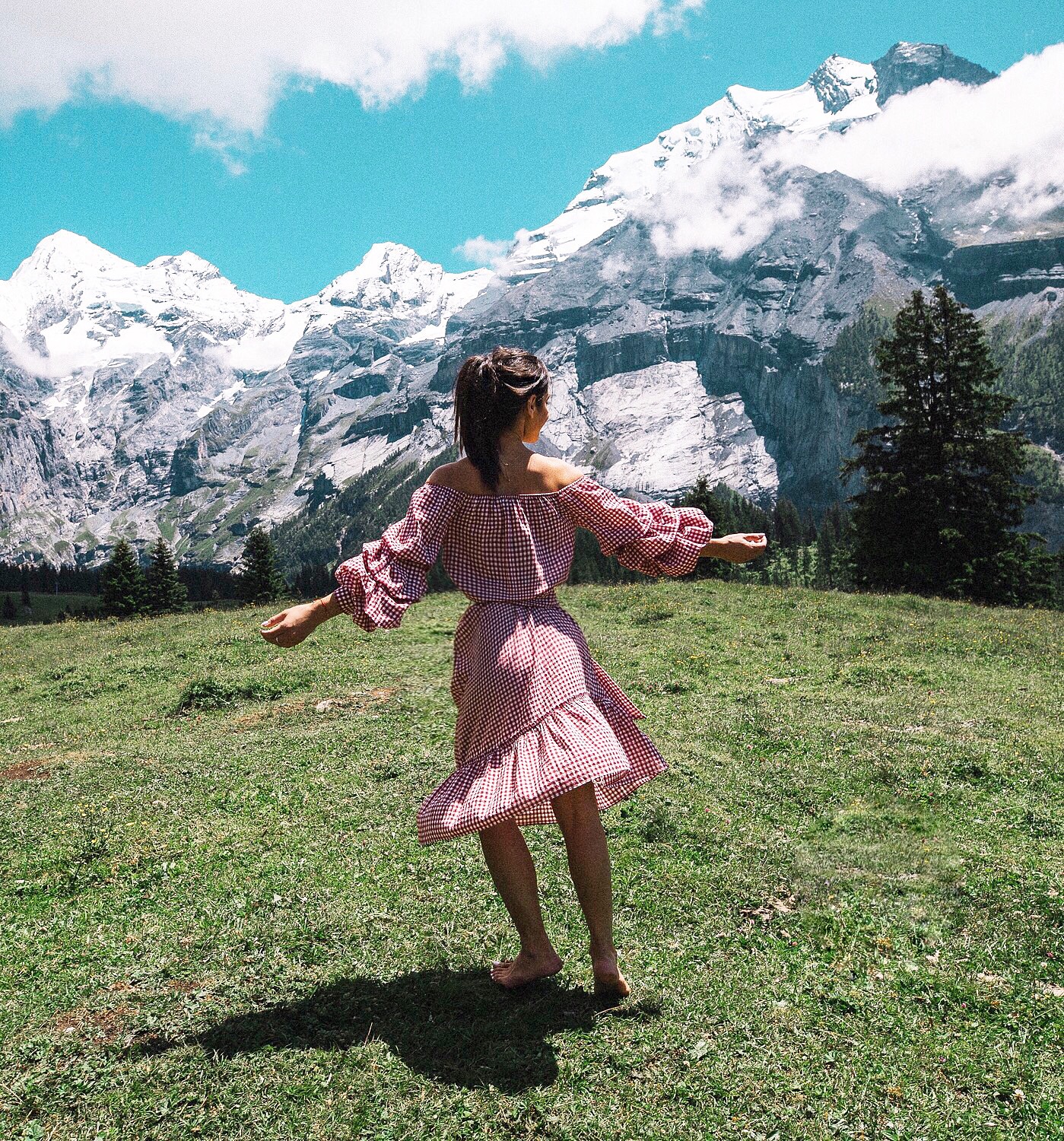 Since I’m recapping my 2017 travels, one of my most memorable trips of the year was my trip to Switzerland. I was working in Sweden for a job at the end of June, and wanted to visit somewhere in Europe after the job finished since I was already out there. I brought my friend with me while working in Sweden, and we were deciding between South of France and Switzerland. She wanted to go to Paris and the south of France, and I wanted to go to Switzerland. Everyone is in the South of France or Italy during the summer, especially bloggers, so I really wanted to go somewhere unique and different that not a lot of bloggers go to. It turns out, Switzerland was the cheaper flight, so I ended up getting my way 🙂

I had two struggle trips this year, the first one was Jamaica and the second was Switzerland. Although I found a cheap flight, I didn’t realize Switzerland was one of the most expensive countries in the world, and the moment we got to the airport in Sweden, it was just one thing after another that went wrong. Our flight was at 6am, and it turns out I was supposed to buy both of my friends and my ticket, but only bought mine by accident. The line to check in was over an hour wait, and it wasn’t until halfway to the check in desk where I realized I only had one confirmation email with my name on it. To keep the story short, we were frantic trying to figure out if we could still buy a ticket for my friend, and we were approaching boarding time as we were still standing in the check in line at the airport. It was a disaster but we ended up being able to get my friend on the flight after spending 4x the amount of money for the initial ticket, but we were on our way to Switzerland and got on our planned flight, so we couldn’t really complain. Because we checked in late on the WORST airline (never fly AIR BERLIN), when we landed in Zurich, sure enough our bags didn’t make it with us.

I remember that day in Zurich was one of the hardest travel days I ever experienced. I had come from not sleeping for a week in Sweden because I was jet lagged the entire time and it was sunny and bright pretty much the entire night, because in Sweden in the summer it only gets dark for two hours or so. I was working long days so was really exhausted even before the Switzerland trip started. From the moment we arrived at the airport it was a constant struggle for the next few days. After standing in line at the airport in Zurich to fill out our form for our lost bags, they pretty much gave us no insight or hope as to when we would see our luggage. I packed for the entire summer in Europe- everything was in my checked bags and all I had was a backpack with my laptop and thats it. We then waited in line for three hours in no air conditioning at the Zurich airport to rent a car. We were supposed to drive three hours to the city we were staying at right when we landed, but I suggested we stayed until a few later flights came in from Sweden to see if our luggage would come on a later flight before we drove three hours away from the airport. I learned my lesson and once you drive far from the airport, you are less likely to see your bag anytime soon. I remember we tried to sleep in our car in the middle of the city somewhere because I started to feel like a crackhead on no sleep (which we failed miserably at our car nap and couldn’t sleep), so went to Zara to go shopping for new clothes and tried to buy toiletries for the next few days. We drove back to the airport to see if our bags miraculously arrived on a later flight, with no such luck. So we headed on our three hour journey at night to the next city and hoped we would see our luggage soon.

*Luggage update: We got it three days later and had to drive three hours back to the Zurich airport to pick it up.

That was my intro to Switzerland that I thought I’d share, because the people who read my blog need to know it’s not all luxurious and pretty all the time. I travel sometimes out of my own pocket, and experience lots of obstacles along the way. Although there are constant struggles, I’ve realized those trips become the most memorable. When you go off the plan and improvise is when the unexpected happens and thats the beauty of it all.

Switzerland is breathtaking. It’s LITERALLY picture perfect. It’s the cleanest and most pristine country I’ve ever been to. The roads are perfectly paved, and not a piece of trash in sight anywhere. There are fancy cars everywhere you look and you feel like you are driving in a Mission Impossible movie through the long tunnels and windy roads in the mountains. One thing to know about going there, is that everything is extremely expensive. I paid $8 for a bottle of water off the side of the street.

Since we rented a car we had the opportunity to drive through the country. We didn’t have time to hit everywhere I wanted, but these are the cities and sites we visited:

Zurich- Spent a day exploring Zurich while killing time to wait to see if our luggage arrived. It’s a beautiful city and def worth a visit! It lies on the German side of Switzerland so the language spoken is basically German with a Swiss dialect.

Interlacken- Started off the trip with three nights in Interlacken. It’s  a central place from a lot of beautiful sights. We also wanted to skydive or go paragliding there because its a great place to do it, but the weather didn’t permit unfortunately. We ended up doing it in Gstaad instead.

Bern/Blausee Lake- Such a beautiful place to visit. Crystal clear and calm lake in the middle of the mountains, with a flowing river nearby and breathtaking views.

Oeschinen Lake-Hiked to this gorgeous blue lake that lies literally in the middle of the Swiss snow capped mountains. It looked like straight out of a postcard. My pictures almost looked like a fake backdrop it was so pretty.

Furka Pass- From Interlaken to our next destination we decided to drive through the Furka Pass which is a high mountain pass through the Swiss Alps. It’s basically a long, windy road through the mountains. You may recognize this road in a James Bond movie.

Gstaad- I stayed at a stunning hotel called Gstaad Palace in the town of Gstaad. This place was such a gem and looked like a castle in the middle of the Swiss mountains. I felt so removed from everything and in a completely different world there- in the best way possible. One of the activities that was organized by the hotel was a day trip to Walig Hut, an authentic Swiss Alpine hut built in 1786, 1800 meters up in the mountains with spectacular views of Gstaad and the Saanenland region to have lunch.

We also were taken to a dairy farm to see how cheese is made next to the Walig Hut because it lies next to a bunch of farmland in the mountains. I loved how the cows in Switzerland had bells around their necks and roam freely in the mountains, instead of being on top of one another in a small space like most cow farms in America. The cows definitely have a good life living in Switzerland.

I also went paragliding in Gstaad which was a beautiful place to do it. It was my first time and it was such an incredible experience. I highly recommend doing it while in Switzerland, its really the perfect place with spectacular views.

Caux- We visited the small village of Caux in the Canton of Vaud which is a charming town overlooking Lake Geneva. On the way there we passed a few sunflower fields outside of Geneva which are all over Switzerland during that time of year (July). I had a moment at one of the sunflower fields because its my favorite flower and the fields are just so beautiful.

Geneva- Ended the trip in Geneva. Geneva is on the French side of Switzerland so most everyone speaks French there. The city practically is on the French border. I really liked Geneva, we ended up meeting some locals at dinner and they took us around for the night and we went bar hopping which was fun. It’s a lively and beautiful city, and has great shopping!

Lake Annecy, France- Because we were so close to France, we took a day trip from Geneva to Lake Annecy in France. My girl friend and I took a boat out ourselves and spent a few hours relaxing out on the lake.