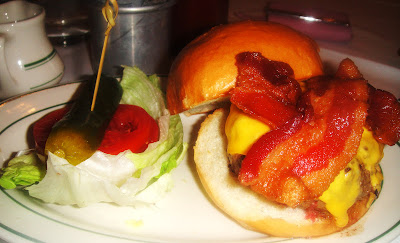 In Vegas, I stumbled across P.J. Clarke’s in the Ceasers Palace Hotel. Hungover and craving good substance and a burger, I decided to stop there. I’ve actually read about P.J. Clarke’s online. It’s a classic bar/restaurant established in 1884, and has original locations in New York City and along the Hudson River, but has also opened in Washington DC, Vegas and Brazil. This place is an old-time classic restaurant known for good pub food and especially famous for it’s burger, so I tried it.

I really enjoyed the burger. I don’t know if I was just desperately hungry and anything could have tasted good in my state lol, but it was pretty good to me. Definitely not anywhere near the best, but it was solid- I had no complaints. I ordered the “Cadillac Burger” for $13.75, which is their special and most popular burger. It comes with American cheese and bacon. It’s a simple burger, nothing special on it besides bacon, but the meat was cooked perfectly. The negatives: the bun was just okay. It was kind of dry and nothing special. Also, our server said the burger was big, but I thought it was quite small. There was more bun then meat, which I hate. Also the price- $13.75 is kind of ridiculous for a burger that doesn’t even come with fries. Even Father’s Office, Umami, & Flemings are all cheaper and way BETTER. They should lower the price, especially if the meat isn’t a Kobe or Prime beef. BUT because the meat was cooked perfectly, and there was a lot of bacon, it was juicy and had great flavor. This burger definitely isn’t in my top 5, but it’s worth a try if you stumble across P.J. Clarkes. It’s a classic.

CADILLAC BURGER, WITH SIDE OF FRIES
The fries were okay too. They reminded me of In N’ Out fries a little. They tasted fresh. They were good enough for me!
For the original location in New York City and other locations/menu, check out their website!
P.J. CLARKES
Forum Shops at Ceasar’s Palace
3500 Las Vegas Blvd
Las Vegas, NV 89109
www.pjclarkes.com

*ME THE NIGHT BEFORE IN VEGAS*